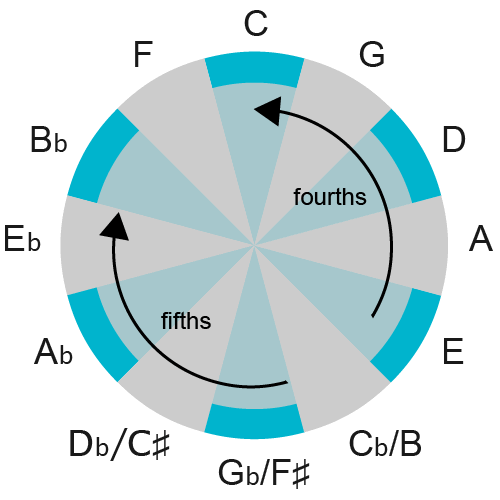 The circle of fourths is also known as the circle of fifths.  If we follow the circle round in an anti clockwise fashion, the notes go up the fourths, i.e. when we go from C to F , we go up an interval spanning four notes C, D, E, F.

If we follow the circle round clockwise the notes go up a fifth.

Most chord progressions in music especially jazz and also classical music go through the cycle of fourths.  So we will be following the anti clockwise circle of fourths direction.

As well as identifying and building chord progressions, the circle of fourths also helps us with our key signatures.

The key of C has no sharps or flats.

The most common chord progression in music is the V I.

Many pop and rock songs go between the I chord and the V chord.  The V chord always precedes the I chord in the circle of fourths.

Referring back the the section on "harmonised seventh chords" you can see that the V chord of a key is a dominant 7 chord.

If we look at the circle, we can find what a V I would be in any key.

So it can be seen that the circle is an effective tool for changing key.

Another example would be a blues chord progression.  Ever heard the first chord change in the blues described as going to the "four chord"?

Well that means a chord a fourth away.  So if we need to find what the second is in a blues in the key of A we just look at the next chord in the cycle which is D (all chords in a blues are dominant 7 chords so the two chords would be A7 and D7)

What about the common chord progression in countless pop and rock tunes the IV, V, I ?

This can be easily seen on the cycle.

We can see that a fourth away anti clockwise from C is F and a fifth away clockwise is G which gives us F, G, C.

Now if we want to transpose that same progression to the key of E we can see from the cycle that this is A, B, E.