Had a great time creating the new samples for the site. Here’s how I did them. 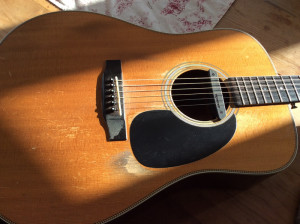 Tried to do this in my home studio, but until you make your first sample set, you don’t realise how quiet the environment needs to be, or how much background noise, however light is going on. Even tried doing this in early hours of the morning but just one car going past on the main road would mean a ruined take of a string as it got quieter.

Eventually decamped to a local studio and finished off there, even then we had to retake a few when somebody closed a door heavily in building next door.

For this particular use, unlike a normal sample set, I just had one set volume. Tried to be as consistent as possible, but think there is a certain “character” in the mix of sounds we got.

This is well seasoned (over 30 years old) and played in guitar as you can see and really pleased with the end result.

This was much easier, just DI into my recording gear, then season with some amp plugins and various eq and fx at the mixing stage.